Lincoln Air National Guard Base – previously Lincoln Air Force Base, is a Nebraska Air National Guard installation located approximately 6 miles (9.7 km) northwest of Lincoln, Nebraska. The facility is a joint use civil airport/military base with the Lincoln Airport which provides airline, charter and general aviation service to the public. It is located within the city limits of Lincoln. 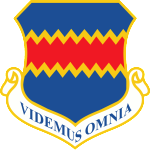 Offutt Air Force Base – is a USAF installation near Omaha, and lies adjacent to Bellevue in Sarpy County, Nebraska. It is the HQs of the US Strategic Command (USSTRATCOM), the Air Force Weather Agency, and the 55th Wing (55 WG) of the Air Combat Command (ACC), the latter serving as the host unit.  Aviation use at Offutt began in September 1918 during World War I as an Army Air Service balloon field. It was renamed in honor of World War I pilot and Omaha native 1st Lt. Jarvis Offutt in 1924.