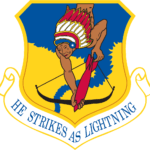 Bangor International Airport/101st Air Refueling Wing –  is a joint civil-military public airport on the west side of the city of Bangor, in Penobscot County. Owned and operated by the City of Bangor, the airport has a single runway measuring 11,439 by 200 feet. Formerly a military installation known as Dow AFB, Bangor International Airport remains home to the 101st Air Refueling Wing of the Maine Air National Guard, although most of the Air Force’s aircraft and personnel left in the late 1960’s. It was designated by NASA as an emergency landing location for the Space Shuttle.