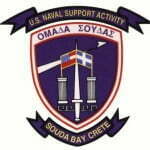 Souda Bay Naval Station (Crete) – is a bay and natural harbor near the town of Souda on the NW coast of the Greek island of Crete. The bay is about 15 km long and only 2 to 4 km wide and a deep natural harbor. It is formed between the Akrotiri peninsula and Cape Drapano and runs west to east. The bay is overlooked on both sides by hills, with a relatively low and narrow isthmus in the west near Chania. It is a popular tourist destination although there are no real public beaches due to the presence of the naval base.

All Greece US Military Bases