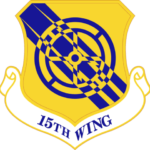 Joint Base Pearl Harbor-Hickam  –  is a US military facility adjacent to Honolulu, Hawaii. Pearl Harbor is 8 miles from downtown Honolulu.  It is an amalgamation of the USAF Hickam AFB and the US Navy NB Pearl Harbor, which were merged in 2010.  As part of Pacific Air Forces, the US Air Force 15th Wing provides strategic and tactical airlift capability to PACAF and Air Mobility Command operating the C-17 Globemaster III. It also enhances PACAF’s power and reach operating the F-22 Raptor. 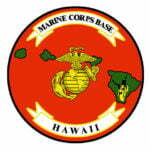 Kaneohe Bay  – Located on the windward side of Oahu, approximately 12 miles (19 km) northeast of Honolulu.  The base lies between the two largest windward O’ahu communities of Kailua and Kāne’ohe, and the main gate is reached at the eastern end of Interstate H-3. Formerly MCAS, Kaneohe Bay and originally NAt Kaneohe Bay, is a U.S. Marine Corps base facility and air station located on the Mokapu Peninsula of windward O’ahu in the City & County of Honolulu.